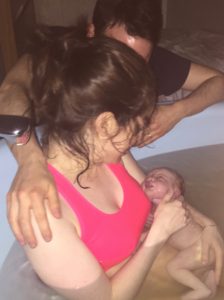 Nina was our Doula for the birth of our first daughter Romee, 17 May 2015.

The birth was an amazing, empowering and unforgettable (in a good way!) experience and so much of it is thanks to Nina.

When I was pregnant halfway, I was lucky enough to meet Nina in an unrelated event. I have already done quite a bit of reading about natural births by this stage and thought whether this is what I want to do. After talking to Nina I felt inspired and was convinced this is what I want. Best decision ever.

I decided that I want Nina by my side during the birth for a number of reasons:

-I am not from the UK originally, and not familiar with the health services and medical procedures. I wanted someone who knows the system and culture to be there with my interest in mind.

– My partner Tom was a bundle of nerves. He supported my choice of a natural birth but really wanted someone who has done this before to be there next to us and guide us through. I needed someone to offset his nerves, be calm and supportive with a clear mind at the scene. If you have met Nina you already know the calming effect she has when present.

– I read about natural births a lot and realised that one of the most important things is to “let go”. Since I am a bit of a control freak I was worried that I wouldn’t be able to release responsibilities. Having Nina around, trusting that she knows what I wanted, completely did the trick for me.

– Nina also speaks my native language, Hebrew עברית, which made me feel safer. I was worried that in the primal moments of giving birth I will revert to my natural language (which was partly the case!) and this was a great bonus.

So we asked Nina to be our Doula and met with her a few times in the following months. Nina was a fountain of knowledge, helped us mentally-prepare for the birth, answered all our questions and gave us important tips for preparing the house for the baby. She lent us books, shared shopping lists and was generally very helpful.

My contractions started a week before the due date, in the morning, and became quite regular in the afternoon. We called Nina to consult her every few hours and finally invited her to come over when I felt that the contractions are regular and getting more frequent. I can’t describe the effect she had when arriving, we really felt in safe hands. She helped me cope with the pain in ingenious ways- used pressure points, guided my breathing and taught me how to conserve energy for the long journey ahead. And it really worked, the contractions became stronger and more frequent and on Nina’s advice we left for the hospital.

At the birth centre the midwives let us in the birthing room but then more or less left us to it… so if Nina wasn’t there it would’ve been just me and my partner, not knowing anything, trying to get through the contractions on our own for hours(!). Luckily we had Nina with us to support this process, and she kept suggesting new and different ways to relieve the pain and help advance the contractions.

The best thing was how she really kept us positive the whole time. When contractions became really painful and I was on the verge of despair she kept saying how it’s a good thing and it means that the birth is coming soon. Looking back, this is one of the things that helped me the most. Generally I felt that Nina had confidence in my ability to succeed with a natural birth and it gave me confidence as well.

When the moment was right Nina called the midwives for the actual birth. Thanks to her sense of diplomacy she managed to work in perfect cooperation with the midwives that she never met before (they also mentioned how great she was afterwards!).

The birth itself was amazing, in water, and somehow during it Nina managed to take some AMAZING photos too!

Nina was everything you want from a birth supporter. She was gentle, positive, calming, sensitive, encouraging, knowledgeable, trustworthy, never ran out of energy, confident and generally, a very fun and pleasant person to share this great moment with.

I had exactly the birth I was hoping for, my partner and I can’t thank her enough. We named baby R’s first doll after her!!